The goal of the day was to bring Solar Sounders and an aluminum bucket (Car Brand) to the farmer's markets, starting at the local one. We had test busked in the square last afternoon. When the sun fully struck the Solar Sounders they blazed frequencies, but there was much traffic coming from the bridge to drown the them, and very few pedestrians of the clientele sort. By mentioning clientele I refer to my son's quest for gold, for busking would earn him dollars to buy candies with. My quest was to experiment with social interactions and explain Solar Sounders to strangers. 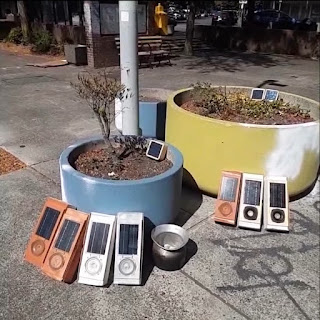 On the test-busk I only spoke with one stranger named Jim, who is not a bum but had walked the streets, been chewed up by them and had a dog named Max. He is studying to be a pastor and I offered the a dove (sounder) for his church but he corrected me: his sort of pastor walks the streets and helps others. He wanted a dove to freak out his neighbors and offered to buy it. I repeated they were not for sale as he cradled it sunward in his arm. "Well then," he said and picked through a handful of minor change, dropping some in the aluminum bucket. It clinked, the boy smiled. He brought the coins to the Thai shack for some tamarind iced tea. 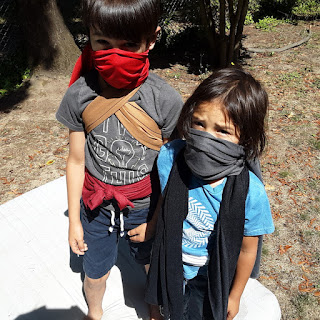 I bought the boys some Pad Thai too, and while we ate I noticed a bicycle-mounted bum circling near the Sounders which leant against the brick semi-wall near a cardboard bum-bed. He skirted us sitting in the shady Thai restaurant patio. "Do you want us to move those away?" I asked. "No worries! They're really trippy." Thus he was copacetic which I could not have told from his hollowed eyes. He smiled a bit. "Good weird, right?" "Sure!" As the test-busk wound down, I confided my trippy sounds in the open-mindedness of bums, and that quarter would be safe. Jim did have a weird moment when he started walking away with the dove, and I had to snatch it back. 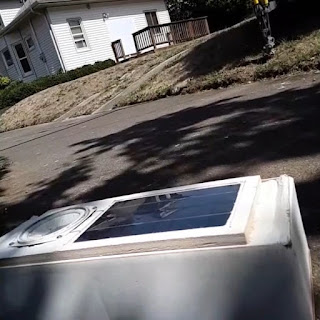 Today we started early, Kiri and I. I thought we might leave in the truck with an extra battery of four Sounders, but we had become hungry so Kiri convinced me to bike. We left with two full backpacks (two monks, one dove, and three cicadas) and the aluminum tip bucket. I joked, "I usually wear a helmet but today a stylish Irish beret." We biked to the same square that held the test busk but today, the Farmers Market. I'm friendly with the man who runs the stage there, even though I flaked on him once. I respect the stage but I can't really even compete with it yet, so everything's copacetic with my strange peripheral busking. In Portland I've never had trouble with the authorities, me and my solar powered sound. But today was different; there was a loud generator and a camera crew. We ordered some crepes which arrived promptly. As we ate a Japanese production crew supervised an American film crew. It became clear that we would not busk, for the extra bustle and the loud sound of their generator would easily drown us out. We started biking home, but stopped halfway, and congealed a plan to load our bikes onto the 16 bus toward downtown Portland and the main Farmers Market. 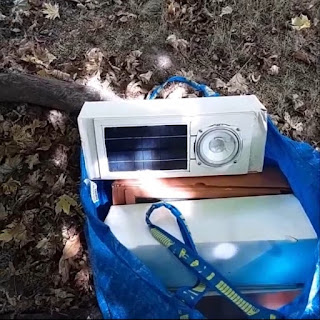 The bus took us to 6th and Oak, we got out and removed our bikes. The glazed, wide, brick sidewalks, somehow shady in the urban canyon, mostly deserted except near the market. We biked south and west uphill to Pioneer Square, the glazed brick cascade of steps baking in the Sun. A young tour guide babbled in the shade of a solitary oak. The courthouse sat silently across the street. The brick steps form a large acoustic lens throughout the park but there also sits a smaller recessed lens near Starbucks. A young, vaguely homeless couple clustered on some cardboard in the shade. We set up in the middle of the lens, resting Sounders against the bricks, angling them towards the Sun. Then began our first encounter with the lady in a wheelchair holding a dog, and her friend a bearded lady. She and I both wore pink shirts and our conversation was pleasant, and they expressed true interest. I'm open to all forms of sexuality and they were all open to all forms of electronic music. So naturally solar Sounders are healing; their day-tripping sounds present an alternative to mainstream electronic music. They inhabit Sunny baked spots of midday sun, reflecting the weirdos' baked mixed feeling of boredom and paranoia. Most people in the world don't have ears. They sit there too, baking in the sun. You can be certain that most people will stroll by and not even notice the weird in their ears. That knowledge helps me focus on particularly meaningful interactions with weirdo strangers. 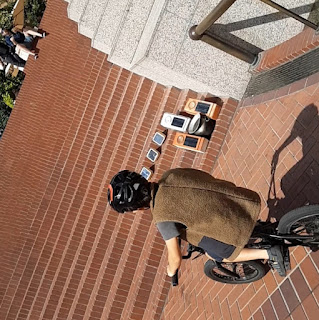 Dwelling a little bit longer in Pioneer Square, we moved the Sounders twice within that massive glazed amphitheater. Moving on, we packed up the Sounders and the aluminum tip bucket. Pumping farther up south and west we arrived at the strip of park that begins the main Farmers Market, and locked our bikes at the edge of it. Because it's big we hiked around it first, arriving at the top of the hill. There, I placed the Sounders on a patch of sunny dirt, with the tip bucket barging onto the sidewalk. One lady asked me what we were doing and I answered "we are busking." Kiri and I had agreed on this answer the night before in a discussion. I gave him some money to get ice cream and pizza, then sat down in the shade to observe pedestrians, their shadows, and a very small percentage of interested people: babies, three older men with caps, one bum who said it sounds trippy, the lady in the wheelchair with the dog and the bearded lady. I think one girl dropped a micro-coin in the bucket by mistake. The three older men were separate, Smiley, and wanted to see under the hood. I responded in kind, showed them the simple circuit board and speaker cone shrouded by the solar panel. To each man I worked my mouth around a manifesto, explaining that I made synthesizers for sale, but these are not. It's an experiment. I'm interested in using solar for something in the moment, like electronic sound. That's why they don't have batteries and shadows mute them. To another stranger I explained the palette: two monks, a dove, and three cicadas. "They're fixed at these sounds, there are no knobs, it's art!" I persisted. The sunny corner had good traffic but an inner glade was quieter and harbored  relaxing individuals and a small patch of sunlight wither removed the Sounders. 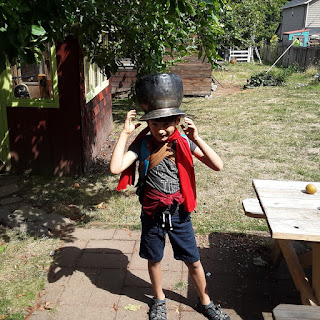 From this part of the day on we met no more strangers and descended back down hill to meet the bus back home, which cradled our bikes. I thought of Kiri quietly singing with the dove and realized this is a possible avenue to generate more gold: performing an imitation of the sounders with our voices. If I throat sang with the monk, then I would become what it was imitating and thus a musical loop of inspiration. That's generating a performance greater than just some cardboard boxes making trippy sounds for bums. I mean for some real clientele, we could have accented the sound, with our own voices, like a band. Well I did get a paper bag of fragrant basil stuffed in the aluminum pot.

Today I learnt from a combination of bums and smiley gentlemen. I need to implement "Tuba Car" ASAP. It is the thumping trippy bass of the sounders, installed in my shingled Tool Shed as a twelve inch woofer, a sixty watt solar panel, over-driving unbeknownst a seven watt car amplifier chip on aluminum heat-sink. I will need to experiment with a range of panel wattages down to ten, to discover what causes the wonderful distorted tuba sounds. I shall recreate the shed on elf scale with fine cedar shingles, a corrugated plastic roof, like a dog house for the woofer and the circuit. I think the the tuba sounds truly may only have one cause: current interactions on the supply caused by extreme amplification. I include a chaos knob in the fine electronic organs which I sell, to give them sophisticated sounds of very fine granularity. A Solar Sounder is different, it gets all the chaos it needs from the panel interacting with the environment of light, and a secondary action is just as nonpareil. That is, the current relationship of the panel and the speaker amplifier, mediated by the main bypass capacitor. Thus tuba car thumps beats in a rhythm controlled by its amplifier gain. Simple circuit bending knowledge, thanks Jessica Rylan, Todd Bailey, David Tudor, whomever else you should comment below!
Posted by PeterB:JustB at 6:30 PM